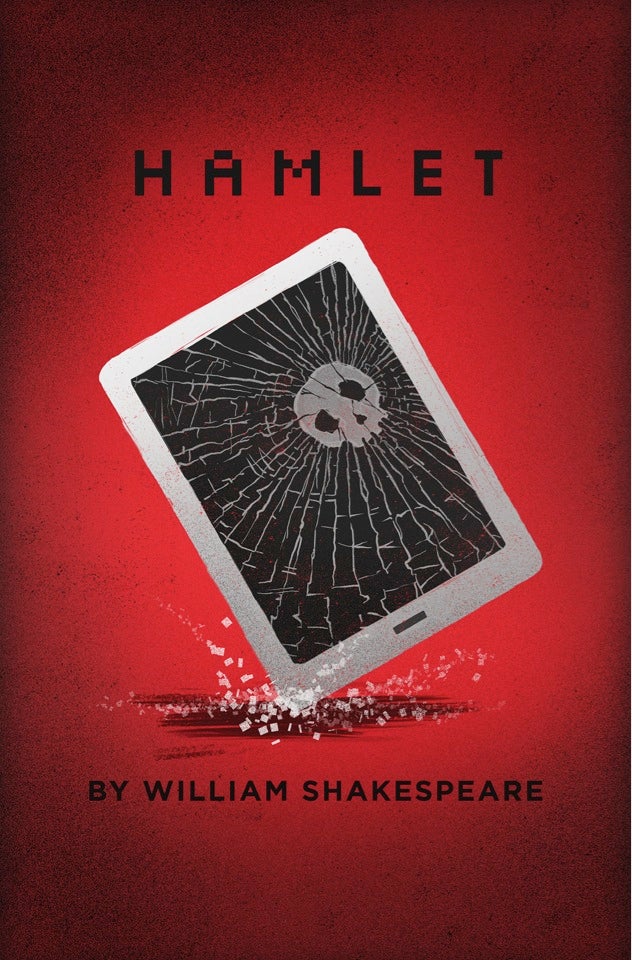 The Georgetown University Theater & Performance Studies Program’s contemporary production of William Shakespeare’s Hamlet runs Nov. 7-16 (showtimes below) in the Davis Performing Arts Center’s Gonda Theatre. Directed by Professor Derek Goldman, this fresh telling of the classic play explores its themes of loneliness/alienation and the tension between private and public worlds.

Being developed in tandem with an interdisciplinary seminar on the play — “Hamlet, the Course” — taught by director Prof. Derek Goldman, the production mines the play’s connections to the emotional and material lives of students in 2013. In the immersive course, students explore the classic work from multiple angles through analysis of many versions (films, texts, adaptations) and through performance, examining what the play means to them in their own lives.

Prof. Goldman says, “The character of Hamlet refers frequently to the ‘distraction’ running rampant in the kingdom…One of the core things the play is about relates to a student’s sense of growing disconnection from those around him, about how so much of what others find beautiful and noble is for him ‘rotten’ and ‘out of joint’.’ It has been rewarding to explore students’ own sense of identity and language through their rapidly changing relationships to devices and technology, and how these impact their experience of death and commemoration, power, friendship and social hierarchies, romance and sexuality, depression, and more.”

On Friday, November 8 at 5:30 p.m., a pre-show discussion titled “Remember Me: ‘Hamlet’ and Its Contemporary Resonance” will feature a panel of internationally acclaimed artists and scholars discuss the enduring legacy of Hamlet, including the following participants:

Showtimes are as follows:

On Tuesday, November 12 at 7:30 p.m., in a co-presentation between the Davis Performing Arts Center and the Folger Shakespeare Library, Tony Award nominee Kathleen Chalfant (“Angels in America,” “Wit”) will perform a staged reading of the late Lynn Redgrave’s celebrated play, “Shakespeare for My Father,” in the Davis Performing Arts Center’s Gonda Theatre.

Called “a pleasure and privilege to watch” by the New York Times and “an original, funny, often fascinating…blend of art and psychotherapy” by Time magazine, this autobiographical Tony-nominated work offers a poignant portrait of a child’s longing for the love of her daunting, charismatic Shakespearean actor father. Her first foray into playwrighting as family reminiscences, Ms. Redgrave’s “Shakespeare for My Father” weaves scenes from the Bard that delightfully coalesce with events in her young life, eliciting memories of Sir Michael and engaging impressions of the celebrated stars who frequented their home and lives.

Kathleen Chalfant, a dear friend of Lynn Redgrave, returns to Georgetown after several previous performances on campus (Tennessee Williams Centennial Festival, Studs Terkel’s Will the Circle Be Unbroken, and History Matters/Back to the Future featuring scenes by historic women playwrights). Chalfant has won numerous awards for her stage work, including the 1993 “Angels in America: Millennium Approaches,” for which she was nominated for a Tony; and “Wit,” which earned her Obie and Drama Desk awards.

Tickets to the Georgetown Nov. 12 performance of “Shakespeare for My Father: A Staged Reading” are $15 general, $12 faculty/staff/senior/alumni, and $5 student.

A performance of “Shakespeare for My Father: A Staged Reading” will also be given the preceding evening Nov. 11 at the Folger Theatre, in conjunction with the opening of the Folger Shakespeare Library’s exhibition “Here is a Play Fitted,” related to Redgrave’s career as an actor and playwright. For additional details and tickets for the Nov. 11 show and exhibition viewing, visit www.folger.edu.

Davis Performing Arts Center Artistic Director Goldman says of Remember Me, “This season theme highlights theater’s unique power to reconstitute the past into a present, live event… In a range of different ways these plays all explore how the past haunts the present — sometimes insisting that we overcome distraction and not forget (as with the ghost of Hamlet’s father), sometimes in the form of focusing on embedded histories of slavery (“Insurrection”), or secrets that cannot be uncovered (“Doubt”). Revisiting ancient texts like “The Bacchae” in new forms (“A Mouthful of Birds”) also summons up the ghosts and spirits of distant past.”

ABOUT DEREK GOLDMAN
Derek Goldman is an award-winning stage director, playwright, adapter, developer of new work, teacher, and published scholar, whose artistic work has been seen around the U.S., Off-Broadway, and at numerous major regional theaters, as well as internationally. He is Artistic Director of the Davis Performing Arts Center and Professor of Theater and Performance Studies at Georgetown University, where he recently co-founded the Laboratory for Global Performance and Politics. His engagement in this area has taken his work in recent years to the Sudan, China, Poland, Peru, Bulgaria, and throughout the UK, among other places. He is also Founding Artistic Director of the StreetSigns Center for Literature and Performance, an award-winning professional theatre founded in Chicago, now based in Chapel Hill, NC. He is the author of more than 25 professionally produced plays and adaptations, including work published by Samuel French, and he has directed over 80 productions. Recent highlights include: “Our Class” (Helen Hayes Nomination for Best Resident Play) and “In Darfur” (Theater J); “The Brothers Size” (Baltimore Magazine’s Best Production of 2012); “Blackbird” and “Shipwrecked!” (Everyman); “The Glass Menagerie,” and “Begotten,” his original work about Eugene O’Neill (Arena Stage); “Eurydice” and “Young Robin Hood” (Round House); his adaptations of Kafka’s “Metamorphosis” and “Lysistrata” (Synetic); “As You Like It” (Folger); his adaptation of Studs Terkel’s “Will the Circle Be Unbroken” (Steppenwolf and Millennium Park in Chicago and nationally); “Clementine in the Lower 9” and “bobrauschenbergamerica” (Forum Theater); book writer of “Tales from Odessa,” musical based on the work of Isaac Babel, which recently premiered at the Segal Center in Montreal; “Once Wild: Isadora in Russia” (2013 DC MetroDance Award for Outstanding Group Performance) (Word Dance Theater); as well as new work development with Lincoln Center, Kennedy Center, Arena Stage, Steppenwolf, and others. He received his Ph. D. in Performance Studies from Northwestern University.

ABOUT KATHLEEN CHALFANT
Kathleen Chalfant is one of the theater’s most celebrated actors. She is well known to New York audiences and worldwide for her portrayal of Vivian Bearing in the Off-Broadway, Los Angeles and London productions of the Pulitzer Prize-winning “Wit.” For her performance, Ms. Chalfant received the Drama Desk Award, Lucille Lortel Award, Outer Critics Circle Award, Drama League Award, LA Ovation Award, Connecticut Critics Circle Award, as well as her second Obie Award. She was also acclaimed for her Tony-nominated performance as Hannah Pitt in Tony Kushner’s “Angels in America” on Broadway.

ABOUT THE GEORGETOWN UNIVERSITY THEATER & PERFORMANCE STUDIES PROGRAM
Housed in the Davis Performing Arts Center and part of the Department of Performing Arts, the Georgetown University Theater & Performance Studies Program features a nationally recognized faculty of leading scholar/artists and professional practitioners, with a dynamic interdisciplinary major that emphasizes the interaction of artistic and analytic inquiry. The Program has rapidly attracted significant national attention for its distinctive curriculum, which integrates the political and international character of Georgetown, a commitment to social justice, and high-quality, cutting-edge production seasons, including world premieres. In 2012, Backstage selected the Program as one of the top five college theater programs outside of New York, and the Washington Post has said, “Georgetown…in recent years has established itself as the region’s most imaginative academic outpost for drama.” The Theater & Performance Studies Program provides unique focus on adapting, devising and developing new work, interdisciplinary research-to-performance projects, cross-cultural performance studies, and innovative approaches to design and multi-media, as well as playwriting, directing, dramaturgy, ensemble, and solo performance.

The Program invests in a distinctive array of professional partnerships and collaborations, including with Arena Stage at the Mead Center for American Theater, with a growing focus on global performance and politics, as represented by international convenings and residencies (Belarus Free Theatre, Ping Chong, Baghdad University, Anna Deavere Smith) and by the establishment of the Laboratory of Global Performance and Politics, a collaborative initiative with the School of Foreign Service. Each year the Program hosts residencies with guest artists who collaborate deeply with students in the classroom and in the life of the Davis Performing Arts Center. Our major prepares students for lives in varied fields, including the arts, education, public service, and cultural criticism. For more information about the Theater & Performance Studies Program, visit performingarts.georgetown.edu.

ABOUT THE DAVIS PERFORMING ARTS CENTER
Opened in November 2005 in the center of Georgetown University’s campus as the only building in Georgetown history designed specifically for arts education, the Davis Performing Arts Center is the academic home to the Department of Performing Arts and features two theatre spaces: the proscenium Gonda Theatre and the black box Devine Studio Theatre. The Davis Performing Arts Center season unfolds in intimate dialogue with the Department’s curricular offerings. In addition to mainstage theater productions, the Department sponsors numerous music and dance performances, workshops, readings, master classes, symposia, and guest lectures, placing students from the entire Georgetown community in regular contact with leading professionals from the US and beyond. Learn more at
performingarts.georgetown.edu

ABOUT THE FOLGER SHAKESPEARE LIBRARY
Folger Shakespeare Library is a renowned center for scholarship, learning, culture, and the arts. Home to the world’s largest Shakespeare collection and a primary repository for research material from the early modern period (1500-1750), Folger Shakespeare Library is an internationally recognized research library offering advanced scholarly programs in the humanities; a national leader in how Shakespeare is taught in grades K-12; and an award-winning producer of cultural and arts programs—theater, music, poetry, exhibits, lectures, and family programs. A gift to the American people from industrialist Henry Clay Folger, Folger Shakespeare Library—located one block east of the U.S. Capitol — opened in 1932 and is listed in the National Register of Historic Places. Learn more at www.folger.edu.