Music from the Mountains 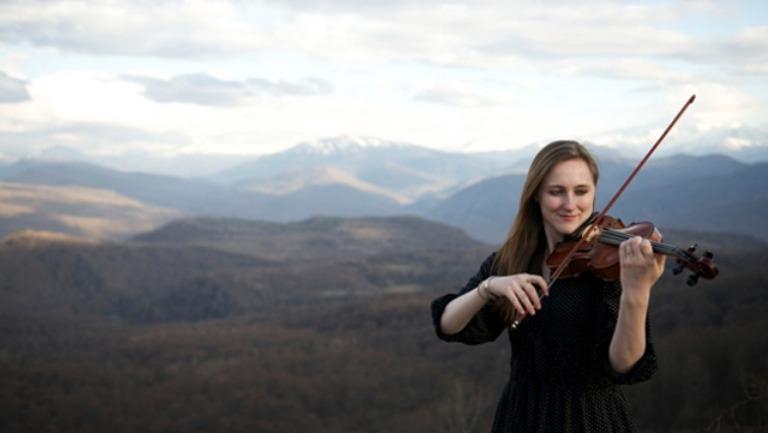 Violinist Hannah Schneider (C’15) started the project Music from the Mountains to help aspiring young musicians in the remote mountains of the North Caucasus. Photo by Debbie Hoehner.

May 27, 2014—As the first American violinist to study at the Moscow Tchaikovsky Conservatory, Hannah Schneider (C’15) knows what opportunities young musicians need to start a successful career. She spent the spring semester in the North Caucasus of Russia, helping young musicians gain more recognition in the music world.

Schneider, a Russian major and government minor, attended the Moscow Conservatory before coming to Georgetown. Some of her friends at the conservatory were from the North Caucasus, a southwestern region of Russia. The North Caucasus is a diverse region, Schneider says, with dozens of languages and ethnic groups within seven autonomous republics. “I knew that there was a lot of musical talent down there, and I knew that the region had the highest unemployment and the most terrorist attacks,” Schneider said.

Schneider also knew that North Caucasian musicians were underrepresented in music venues around the world. “I saw this as an opportunity to go and see if I could help young musicians there,” she continued.

At the beginning of her project, Music from the Mountains, Schneider intended to survey musicians to discover what circumstances affected their careers. She quickly realized that a research survey wasn’t enough. “I feel a really deep responsibility [that] if I’m researching the region, I want to be involved and use my connections to try to make a difference in the region I’m working in,” she said.

Schneider decided to record an album of young musicians, ages 13–25, from the Republic of Adygea. For many of these individuals, traveling to Moscow or Saint Petersburg for auditions is too costly. “It’s just not feasible, but without auditioning in a big city [you] can’t make a musical career,” she explained. “My hope is that I can take this recording to the people who have the means to do recruitment.”

In addition to promoting the album in Russia, Schneider is partnering with Carnegie Hall’s Musical Exchange, a social network for aspiring musicians to “develop their talent with professional mentors.”

Music from the Mountains is just the first step in a larger project, the Caucasus Vault Initiative. While making the album, Schneider also worked to find scholarships to send musicians to summer festivals in Europe. “Going to summer festivals is really key for classical musicians in order to network [and] to get intensive training,” she explained. “If one musician gets out in the broader network of classical music, which is all about connections, then word can spread that there’s a lot of talent here.”

Schneider also intends to host workshops to teach these musicians how to promote themselves. “As a musician who really cares about Russia, my heart goes out to these kids,” she said.

For her work at Georgetown and in the North Caucasus, Schneider recently won the 2014 McTighe Prize, which is given to an undergraduate student who demonstrates excellence in scholarship and service to Georgetown and its surrounding community. This fall, Schneider will address the incoming Class of 2018 at convocation.

“I was inspired to apply for the McTighe because of this project and the revolution it represents in my thinking,” she explained. Like many of her colleagues, Schneider entered Georgetown focused on which major and career to choose. “While these questions are important, they can blind us from seeing the infinitely more pressing questions which should shape everything else in our lives,” she said.

Expanding her exploration of what she wanted to do at Georgetown led Schneider to start the Caucasus Vault Initiative and help others in a remote part of the world. “I would like to challenge the incoming class to reconsider which questions they ought to wrestle with in college.

“College is the perfect time to ask ourselves the most fundamental questions: ‘What kind of person do I want to be?’ and ‘What is the highest good in life?’”