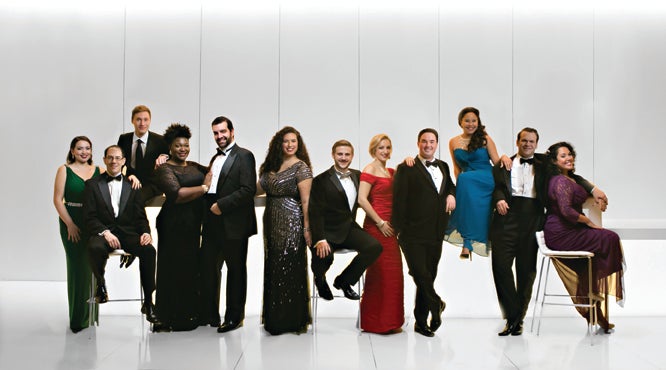 Cellist Char Prescott has performed all over the U.S., including Tanglewood Music Center, the John F. Kennedy Center and Carnegie Hall, and was featured as a soloist for the World Trade Center September 11th Memorial in 2009. Canadian pianist Ryo Yanagitani has won the gold medal at the 10th San Antonio International Piano Competition and the grand prize of the Hugo Kauder International Piano Competition, and has made concerto appearances with the Vancouver Symphony Orchestra, the Montreal Metropolitan Orchestra, Minnesota Orchestra, and more.
MCNEIR HALL, NEW NORTH BUILDING
FREE

Aaron Broadus (Band Leader) is a professor of music at Georgetown University and has performed in DC venues including Blues Alley, The Kennedy Center, Arena Stage and The Howard Theater. He has performed with artists Ray Charles, Aretha Franklin, Lalah Hathaway, The Temptations, Pattie LaBelle, George Duke and Kirk Whalum. Pianist Lura Johnson is a Steinway Artist and the recent Second Prizewinner, as a member of Duo Baltinati, of the 2015 International Johannes Brahms Competition Chamber Music Division. Hailed as “brilliant” by the Washington Post, she is the Principal Pianist of the Delaware Symphony, and has collaborated extensively in orchestral performances and recordings with Yo Yo Ma, Itzhak Perlman, Midori, Leila Josefowicz, and Jean-Yves Thibaudet.
MCNEIR HALL, NEW NORTH BUILDING
FREE

Program includes works by J.S. Bach, Felix Mendelssohn, George Shearing, and John Cook. Acclaimed for his musicianship as an organist and conductor as well as for his academic pursuits in the field of Sacred Music, Russell Weismann serves as Dean of the American Guild of Organists’ chapter in the District of Columbia, and has served on the national board. He is currently the Director of Music at St. Jane Frances de Chantal Parish in Bethesda, Maryland and Adjunct Professor of Music at George Mason University. Russell has been featured on American Public Media’s Pipedreams, and was among a select few number of organists chosen to play a recital on the Rubenstein organ at the Kennedy Center for the Performing Arts during its inaugural year.
DAHLGREN CHAPEL
FREE

Program includes Carl Maria von Weber’s Trio for Flute, Piano and Cello in G minor, Op. 63; Heitor Villa-Lobos’ Assobio a Jato (The Jet Whistle) for Flute and Cello, W 493; and fragments from Sergei Prokofiev’s ballet Romeo and Juliet (arranged for flute, cello and piano by the performers). Bulgarian pianist Ralitza Patcheva has presented recitals at Carnegie Hall, the Kennedy Center, the Phillips Collection, the Aldeburgh Festival in England, the Washington International Piano Series and Festival, as well as many of the concert halls in Italy, Germany, Russia and the U.S. She is on the faculties of the Catholic University of America and Levine School of Music. She holds the Associate Chair of the Chamber Music Program at Levine Music. Ralitza is also the Associate Artistic Director of the Bulgarian Music Society in Washington DC.  Nikolai Popov has been the solo flutist of the the Bolshoi Theater Orchestra in Moscow since 2012 and from 2002-2011, was the soloist of the Tchaikovsky Symphony Orchestra. Russian cellist Vasily Popov was an associate principal cello with the Soloists of St. Petersburg chamber ensemble and cello section St. Petersburg Philharmonic orchestra, and currently serves as the Levine School of Music’s associate chair of Chamber Music and artistic director and conductor of the Levine Chamber Orchestras.