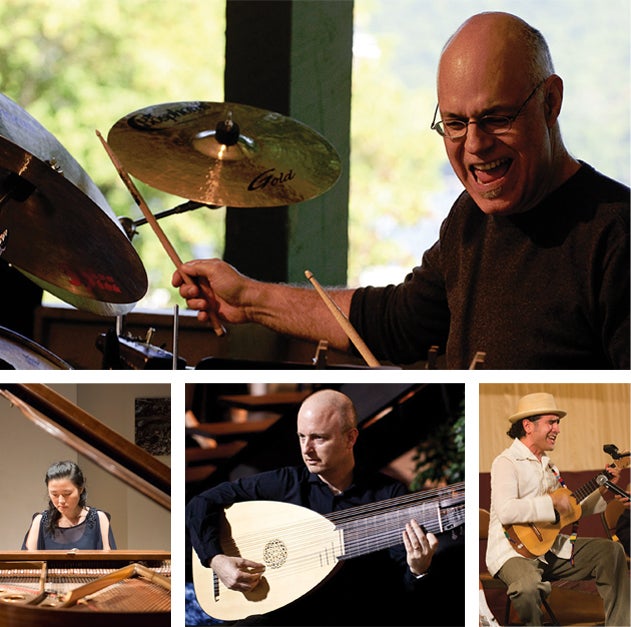 Please note:  The February 14 event has been postponed, due to inclement weather.  Check this site for rescheduled date, to be announced.

Friday, January 31 at 1:15 p.m.
Modern Musick
Georgetown University Chamber Singers
The acclaimed Baroque period instrument ensemble Modern Musick, along with the Georgetown University Chamber Singers, will present a program of viols and voices, featuring English music of the 17th-century which owes its existence to the presence of the Jesuit Order in England during a time when English Catholics were forced to go underground or face dire consequences.
McNEIR HALL, NEW NORTH BUILDING
FREE

NOTE:
This event has been postponed due to inclement weather, rescheduled date TBA.

Friday, February 14 at 1:15 p.m.
Allison Mondel, soprano
Richard Giarusso, baritone
Husband and wife duo Richard Giarusso, baritone, and Allison Mondel, soprano, return to the Friday Music Series for a program featuring art song of the Romantic era, including works by Schubert, Mahler, and Wolf. Both highly versatile performing artists and teachers, Giarusso and Mondel are delighted to collaborate on a new recital presenting stirring masterworks of the German lied tradition, in addition to a few “romantic” surprises. Mondel has been praised by the Washington Post for her “ethereal soprano” and “spare, otherworldly radiance.” A specialist in early music but treading nimbly across repertoire spanning the 11th century to the present, Mondel is music director of award-winning women’s vocal ensemble Eya: Ensemble for Medieval Music. She is also a voice teacher at Georgetown University and in the Washington National Cathedral’s prestigious chorister program. Giarusso, receiving acclaim in the Washington Post for his “expressive and perfectly controlled voice,” serves on the musicology faculty at the Peabody Conservatory, offering interdisciplinary classes in music and literature at The Johns Hopkins University. In addition to his work as both singer and musicologist, Giarusso has also appeared as guest conductor with the Washington Bach Consort, and is artistic director of the Maryland Choral Society and music director of the Georgetown Chorale.
McNEIR HALL, NEW NORTH BUILDING
FREE

Friday, February 21 at 1:15 p.m.
Jacqueline Horner-Kwiatek, mezzo-soprano
Praised for her “pure, lilting voice” (New York Times) that is “a wonder of unadorned beauty” (Boston Globe), Jacqueline Horner-Kwiatek is a member of the world renowned vocal quartet Anonymous 4, as well as being a versatile and accomplished soloist, specializing in early and new music.
McNEIR HALL, NEW NORTH BUILDING
FREE

Laura Yumi Snell, actress
Pat Carroll, saxophonist
Murakami Music: Stories of Loss and Nostalgia
created by Eunbi Kim and directed by Kira Simring
New York City-based pianist Eunbi Kim produces modern interdisciplinary concert experiences, and thrives in collaborating with other art forms to present classical and contemporary music in unique settings. Her most recent project “Murakami Music,” a series of multi-disciplinary presentations based on the writings of novelist Haruki Murakami, was incubated at the cell theatre in Chelsea and recently presented at NYC’s Symphony Space. It has been featured on Japanese television network, FujiTV and profiled in the documentary, “The World Reads Murakami,” on NHK, Japan’s national public broadcasting organization. Inspired by the associations and references to music woven throughout Haruki Murakami’s works, the concert focuses on four of Murakami’s novels — “Norwegian Wood,” “Kafka on the Shore,” “Sputnik Sweetheart,” and “Wind Up Bird Chronicle” — and the music that is integral to these narratives, including referenced works by Prokofiev, Chopin, Schumann, Debussy, Ravel, and original arrangements of songs by the Beatles. Eunbi Kim made her European orchestral debut with I Solisti di Perugia in Italy and has also performed solo and chamber programs in venues such as the National Museum of Women in the Arts in Washington, D.C. and the 92nd Street Y in New York City. For more information on the program for the event click here.
McNEIR HALL, NEW NORTH BUILDING
FREE

March 21 at 1:15 p.m.
Richard Stone, lute
Mark Janello, harpsichord
Music of Bach on his 329th birthday, including Sonatas, a Suite, and Preludes and Fugues by J.S. Bach. Lutenist Richard Stone has performed as soloist and accompanist worldwide. The New York Times called his playing “beautiful” and “lustrously melancholy,” while the Washington Post described it as having “the energy of a rock solo and the craft of a classical cadenza.” He founded and co-directs Philadelphia baroque orchestra Tempesta di Mare, and has played with Taverner Players, Smithsonian Chamber Players, Consort of Musicke, Apollo’s Fire, Handel and Haydn Society, New York Collegium, Orpheus Chamber Ensemble, Orchestra of Saint Luke’s, Boston Symphony Orchestra, Philadelphia Orchestra, Glimmerglass Opera, and Mark Morris Dance Group. Janello whose skills in baroque improvisation the Ann Arbor News called “astonishing,” has performed with the Bach Sinfonia of Washington D.C., and with the Baltimore Symphony. Both are members of the Peabody Conservatory faculty, where Stone is instructor of baroque lute and theorbo and a vocal coach, and Janello teaches music theory.
McNEIR HALL, NEW NORTH BUILDING
FREE

March 28 at 1:15 p.m.
Edvinas Minkstimas, piano
A native of Kaunas, Lithuania, pianist Edvinas Minkstimas has performed at Lincoln Center, Weill Recital Hall at Carnegie Hall, the Phillips Collection, 6th& I Synagogue, and the Mansion at Strathmore. In July 2011, Minkstimas became Artist-in-Residence of the Embassy Series Festival in Washington D.C. His professional debut was at the age of 14 with The Lithuanian National Philharmonic Orchestra (Vilnius), playing the Grieg Piano Concerto in A minor. Minkstimas has released two recordings, featuring solo and orchestral performances of works by Brahms, Beethoven and Liszt.
McNEIR HALL, NEW NORTH BUILDING
FREE

April 4 at 1:15 p.m.
Anderson/Fader Guitar Duo
For the past 20 years the New York City-based Anderson/Fader Guitar Duo, champion of the work of living American composers, has been heard throughout the U.S., Latin America, and Europe, both as the duo and as members of the award-winning Cygnus Ensemble. The list of composers who have written for the Duo and Cygnus include Babbitt, Bond, Davidovsky, Naito, Rakowski, and others. The Duo has performed with James Levine and the Metropolitan Opera Chamber Players at Zankel Hall, and with Cygnus in residence at the Library of Congress in the winter of 2012. Guitar Review magazine noted that “Anderson and Fader are expert chamber musicians with a perfect sense of timing, virtuosity and a sensitivity to nuance.”
McNEIR HALL, NEW NORTH BUILDING
FREE