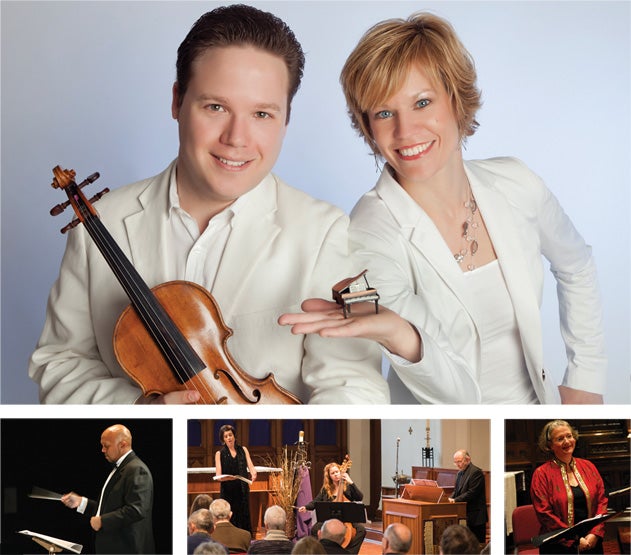 Friday, September 27, 2013 at 1:15 p.m.
Netanel Draiblaite, violin
Lura Johnson, piano
Israeli violinist Netanel Draiblate, concertmaster of the Annapolis Symphony Orchestra who has been praised for his “vibrant” and “passionate” performances (Baltimore Sun), performs with pianist Lura Johnson, Principal Pianist of the Delaware Symphony, who performs regularly with the Baltimore Symphony Orchestra and has been hailed as “brilliant” by the Washington Post. Together, they founded the duo Times Two and have recorded a CD on the Azica Records label. Both have collaborated with acclaimed artists including Yo-Yo Ma and Itzhak Perlman.
MCNEIR HALL, NEW NORTH BUILDING

Friday, November 8, 2013 at 1:15 p.m.
Jennifer Ellis Kampani, soprano
Mark Janello, harpsichord
Handel and the Italians
Kampani and Janello return to the Hilltop for a performance of the music of George Frideric Handel and Italian contemporaries. The duo will offer a performance of the composer’s masterpiece cantata Lucrezia. The program for the event is as follows:

HANDEL AND THE ITALIANS

MCNEIR HALL*, NEW NORTH BUILDING
* Please note that this event has been relocated from its originally scheduled venue of Dahlgren Chapel. Apologies for any inconvenience.