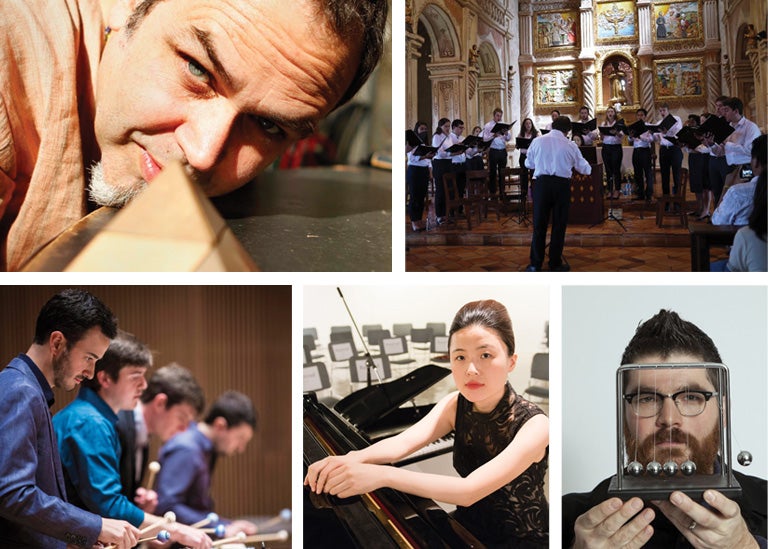 The Georgetown University Chamber Singers under the direction of Prof. Frederick Binkholder will be joined by the acclaimed Baroque period instrument ensemble, Modern Musick in a performance of music composed within the Chiquitos Missions of the Society of Jesus in the 17th and 18th centuries.This Jesuit Heritage Week program features a collection of works edited by Fr. Piotr Nawrot.

Founded in 2012, this DC-based professional chamber vocal ensemble bridges the gap between traditional classical and contemporary music through thoughtful and adventurous programming. Third Practice is named after a term for the late style of composer Claudio Monteverdi, in which he is said to have fused elements of the older “first practice” with the contemporary “second practice,” creating a rich new musical language. The ensemble’s artful singing has been praised for “first-rate” musicality (New York Times).

This program presents acclaimed Cuban composer Pavel Urkiza’s interpretation of classic Cuban songs, performed on period acoustic instruments such as the romantic guitar, the mutto cornet, baroque flutes, and the upright bass. The ensemble includes Afro-Cuban and Mediterranean percussion, illustrating the connection between the Spanish, African, and Creole origins of Cuban music. The musical performance will be accompanied by a visual display of images from the era and narration between songs. Congri is a typical Cuban dish made of black beans and rice, and the origin of the word is from the French “congrès,” meaning a gathering or coming together.

Since 2003, saxophonist Luis Hernandez has performed with Afrobop Alliance, a Latin jazz group that won a Grammy® for Best Latin Jazz Album of the year and was nominated for two Grammy® awards in 2008 for their recording, “Caribbean Jazz Project/Afrobop Alliance.” In 1996, Luis joined the U.S. Navy Band “Commodores” as tenor saxophonist and featured soloist, and was also a semi-finalist in the Thelonious Monk International Jazz Saxophone Competition in 2002.

Program includes Brahms’s Cello Sonata No. 1 in E minor and Violin Sonata No. 3 in D minor, along with Mendelssohn’s Piano Trio No. 2 in C minor. A native of Kaunas, Lithuania, pianist Edvinas Minkstimas has performed at Lincoln Center, Weill Recital Hall at Carnegie Hall, the Phillips Collection, 6th& I Synagogue, and the Mansion at Strathmore. In July 2011, Minkstimas became Artist-in-Residence of the Embassy Series Festival in Washington D.C.

Lauded by The Washington Post as “revitalizing the world of contemporary music” with “jawdropping virtuosity,” Sandbox Percussion has established themselves as a leading proponent in this generation of contemporary percussion chamber music. Brought together by their love of chamber music and the simple joy of playing together, Sandbox Percussion captivates audiences with performances that are both visually and aurally stunning. This program includes the world premiere of a commission by GU Music Program Prof. David Molk.

Josh Quillen has forged a unique identity in the contemporary music world as all-around percussionist, expert steel drum performer (praised as “softly sophisticated” by the New York Times), and composer. A member of the acclaimed ensemble So Percussion since 2006, Josh has performed at Carnegie Hall, the Brooklyn Academy of Music, The Lincoln Center Festival, Stanford Lively Arts, and dozens of other venues in the United States. An avid educator, Josh is a performer-in-residence at Princeton University with So Percussion, co-director of the percussion program at the Bard College Conservatory of Music, and director of the New York University Steel Band. Composer and arranger Kendall Williams was born around the Trinidadian culture and adopted the country’s national instrument, the steel pan. He received a Masters of Music Degree in Music Theory & Composition at NYU Steinhardt, where he also actively participated in the NYU Steel band under the leadership of Artist Faculty member Josh Quillen.