“I have a scream I want the whole world to hear, but I wonder if it will resonate.”
Suaad, member of Syria: The Trojan Women cast 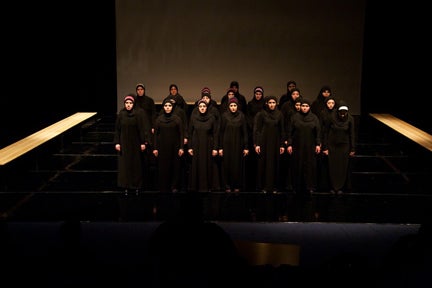 The Laboratory for Global Performance and Politics is deeply saddened to announce that despite many months of constant efforts and advocacy on the women’s behalf from a wide range of top officials, ambassadors, and legal experts, the US Bureau of Consular Affairs in Amman denied the visa applications of the women refugee performers.  The Consulate found that the women failed to demonstrate non-immigrant intent (under section 214b of the Immigrant and Nationality Act), despite the women’s deep ties to their children and young families in Amman.

As a result, Washington audiences will not experience this extraordinary re-interpretation of Euripides’ two-thousand-year-old play, interwoven with these refugee women’s personal experiences of the Syrian conflict.

The plight of the Trojan women resonated deeply with the Syrians. For example, Hecuba’s speech about never seeing her country again moved Suaad, because “…when we were at the border about to cross into Jordan my husband told me to look back at Syria for one last time, because we might never see it again. “ 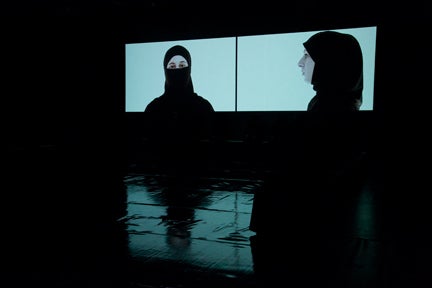 (See below for ticket refund information)

Please join us Friday September 19 at 7:30 p.m. on Georgetown University’s main campus, in the Davis Performing Arts Center’s Gonda Theatre, for VOICES UNHEARD — THE SYRIA: TROJAN WOMEN SUMMIT an evening in solidarity with the Syria: The Trojan Women team.

This one-time event will include high-quality recorded excerpts and behind-the-scenes documentary footage from the process; live discussion with the women (via live-stream from Amman) and with other members of the project’s artistic team, including leading Syrian director Omar Abu Saada; and discussion with a range of leading policy experts and artists about the political realities in the region and the role of art as a humanizing force.

All tickets purchased for the originally scheduled Sept. 18-20 performances of Syria: The Trojan Women will be fully refunded. Please contact Callagy Box office at callagyboxoffice@georgetown.edu or 202-687-2787 fpr assistance.

To find out more information about these extraordinary women and their story, visit www.syriatrojanwomen.org/.
“We were all queens in our own houses. It is like us: We lost everything.”
Fatima, member of Syria: The Trojan Women cast 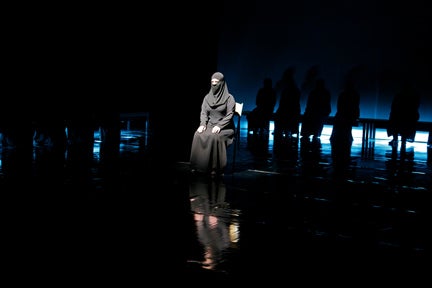 The Laboratory for Global Performance and Politics leverages Georgetown University’s distinctive strengths in international relations and theatrical performance, developing new interdisciplinary approaches to fostering cross-cultural dialogue and understanding, and to advancing peace and social justice through performance. In addition, the Lab is a generative creative space to foster collaborative artistic projects that realize these goals. Finally, the Lab is a hub and a resource center that, in actual and virtual spaces, brings together an expansive global network of artists, policymakers, scholars, cultural organizations, embassies, faculty, and students.

Syria: The Trojan Women is the first of four anchoring events in The Lab’s Myriad Voices: A Cross Cultural Performance Festival. This two-year series of programs is designed to expand awareness and understanding about Muslim societies through the performing arts.  The Festival will engage students and audiences in compelling performances, involve students directly in creating new works in dialogue with leading artists from around the world, and make these performances a springboard for interdisciplinary dialogue that bridges performance, politics, and society.

Myriad Voices is made possible, in part, by a grant from the Association of Performing Arts Presenters Building Bridges: Campus Community Engagement Grants Program, a component of the Doris Duke Charitable Foundation and the Doris Duke Foundation for Islamic Art. The festival is also presented in collaboration with Bridges of Understanding and Georgetown’s Berkley Center for Religion, Peace & World Affairs and the Department of Arabic and Islamic Studies.

Read the Washington Post story on the efforts to bring Syria: The Trojan Women to Washington, D.C.