On the Origin of Species: A Nautical Melodrama 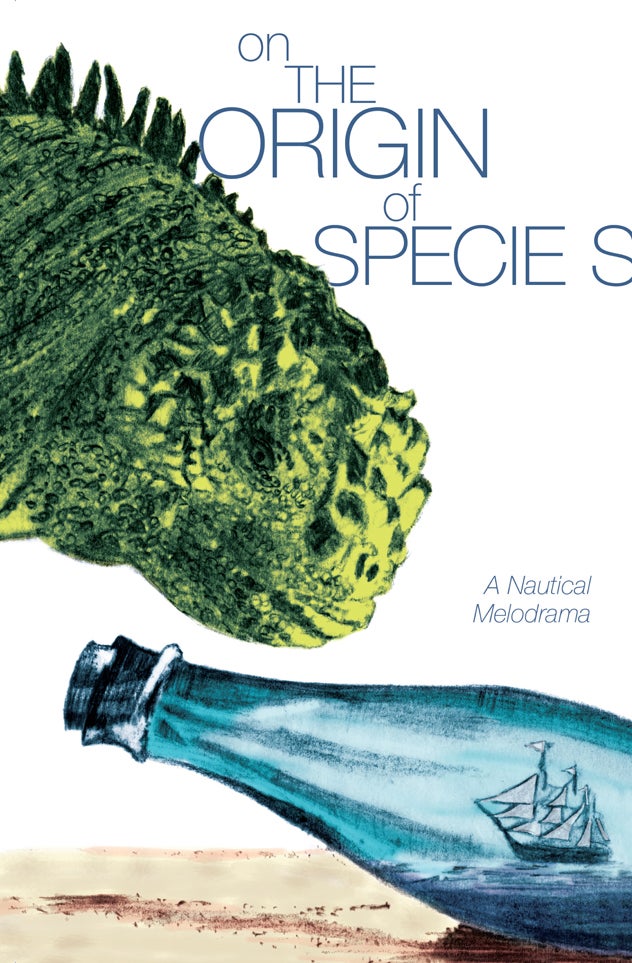 Adapted and directed  by Prof. Natsu Onoda Power
From the book by Charles Darwin

All aboard! From the wild imagination of adapter, director and designer Natsu Onoda Power comes this thrilling and unlikely theatrical take on one of the most influential books of all-time, Darwin’s articulation of the foundation of evolutionary biology. On the Origin of Species is a science-show-meets-nautical-melodrama adaptation of Charles Darwin’s writings-all taking place on his ship, The Beagle. The ensemble cast will query our struggle for existence through scenes, songs, movement, animation, and other theatrical transmutations. Do you have what it takes to survive?!  Part of the 2014-15 Georgetown University Theater & Performance Studies Program’s “Where We’re From:  A Season of Origins and Migrations.”

Named one of the 10 best books of 2006 by both the New York Times and the Washington Post, the bestseller was called by the New Yorker “a wide-ranging invitation to think through the moral ramifications of our current eating habits.” This experiential adaptation mirrors the structure of the book, exploring food chains that sustain us: industrialized food; organic food; and food people obtain hunting, gathering, or gardening. Engaging the question: “What should we have for dinner?” — a quandary which Pollan says has confronted us since man discovered fire — the action in the production moves from a fast-food emporium to a small organic farm in Virginia.

During the course of the unusual show, audience members will also be given maps and encouraged to visit multiple locations around the building, experiencing different site-specific performances and installations about food. They will be invited to visit a “chicken farm” constructed of almost 50 TVs, or to join a group therapy session attended by “vegetables with problems,” and to witness 007 chanterelle mushroom spies hunt for furtive fungi. The performance culminates in a light communal meal, in which the cast and the audience eat cups of corn soup served at giant picnic tables that also serve as a stage.

Onoda Power has been praised by the Washington Post for her “nifty visual tricks” and “delightfully unexpected” solutions for the stage, as well as her work’s “stirring theatricality” and “childlike joy.” Known for her ability to turn a powerful non-fiction text into an unconventional and memorable performance, the last Georgetown Theater and Performance Studies Program show she directed was her Feb. 2010 adaptation of “Madness and Civilization,” Michel Foucault’s 1961 treatise on the history mental illness since the middle ages. Power also shares a connection to the D.C. food scene; her husband Tom Power is chef/owner of the acclaimed restaurant Corduroy. Corduroy will be supplying the corn soup served at the end of the production.

With a cast of 20, Power used an organic farm in Virginia as inspiration for the participation of students in the ensemble-devised production. “We are trying get rid of the theatrical hierarchy, the division of labor: you are cast and you are crew. The ensemble will function in a way that is inspired by a small, self-sufficient farm.”

Ultimately, Onoda Power says she hopes the show’s dinner party feel serves up valuable info, with a side of fun. “I’d like to share the joy that we find in food in a lot of ways.”

Showtimes include the following:

Ticket prices are as follows:

“The Omnivore’s Dilemma” is the final show in the Theater and Performance Studies Program’s 2010-11 season “A Season Named Desire, ” which also included Federico García Lorca’s “Blood Wedding;” and productions as part of the expansive Tennessee Williams Centennial Festival: “The Glass Menagerie” with surrounding performances and installations that ran at Georgetown and then at Arena Stage at the Mead Center for American Theater as part of GU’s partnership with Arena Stage; and “Suddenly, Last Summer.” The season is generously supported by C74.

Natsu Onoda Power, Ph.D. is an Assistant Professor in Georgetown University’s Theater and Performance Studies Program. Recent directing credits include Songs of the Dragons Flying to Heaven by Young Jean Lee (The Studio 2ndStage) and Madness and Civilization (Georgetown University). Recent design credits include Kafka’s Metamorphosis (scenery and costumes, Synetic Theatre) and bobrauschenbergamerica (scenery, Forum Theatre). She is the author of God of Comics: Osamu Tezuka and the Creation of Post World War II Manga (University Press of Mississippi, 2009). Her next project is Astro Boy and the God of Comics at the Studio 2ndStage (February 2012, writing/directing, GALAXY PREMIERE).

Georgetown University Theater and Performance Studies Program integrates creative and critical inquiry, emphasizing artistic excellence, interdisciplinary learning, a commitment to social justice, and the spirit of collaboration. With a dynamic major in Theater and Performance Studies, the Program features a nationally recognized faculty, including leading scholar/artists, and many of the region’s leading professional theater practitioners. One of the country’s only undergraduate programs in Theater and Performance Studies, this fast-growing program has rapidly attracted significant national attention for its distinctive curriculum, reflecting the political and international character of Georgetown, and for its high-quality, cutting-edge student production seasons. Through the Davis Center, the Program foregrounds new work development, classics re-visioned, interdisciplinary programming, and collaboration across faculty, students and guest artists.