In this re-imagining of Henrik Ibsen’s A Doll’s House, award-winning Iraqi-American playwright and performer Heather Raffo (9 Parts of Desire) will examine this iconic play from a Middle Eastern perspective, engaging the stories and experiences of Arab American women. Raffo’s contemporary characters, a family of immigrants, grapple with past and present shames as they try to reconcile their relationship to their identity and to each other. This workshop reading will be developed at Georgetown with professional collaborators, scholars, faculty and students.

Tickets are currently unavailable to the Thursday, December 3 at 8:00 p.m. and Saturday, December 5 at 4:00 p.m. performances of Noura; however, due to the nature of this free, but ticketed event, we expect tickets will become available. A standby line will form one hour before curtain in the Davis Performing Arts Center Lobby.

All tickets unclaimed ten minutes prior to curtain may be released to patrons on standby.

Reserved tickets can be picked up in the Davis Performing Arts Center Callagy Box Office starting one hour before curtain. Please note: all tickets unclaimed by ten minutes prior to curtain may be released to patrons on standby.

Noura is the final event in Myriad Voices: A Cross-Cultural Performance Festival. Myriad Voices is made possible in part by a grant from the Association of Performing Arts Presenters (APAP); Building Bridges: Campus Community Engagement Grants Program, a component of the Doris Duke Charitable Foundation and Doris Duke Foundation for Islamic Art. The festival is also presented in collaboration with the Berkley Center for Religion, Peace & World Affairs, Bridges of Understanding, and the Department of Arabic and Islamic Studies.

Noura is co-produced with the Davis Performing Arts Center in partnership with Arena Stage at the Mead Center for American Theater and is featured as part of the GU Theater and Performance Studies 2015/16 Season. The Arena Stage – Georgetown partnership is made possible thanks to the generosity of Andrew R. Ammerman and the family of H. Max and Josephine F. Ammerman. 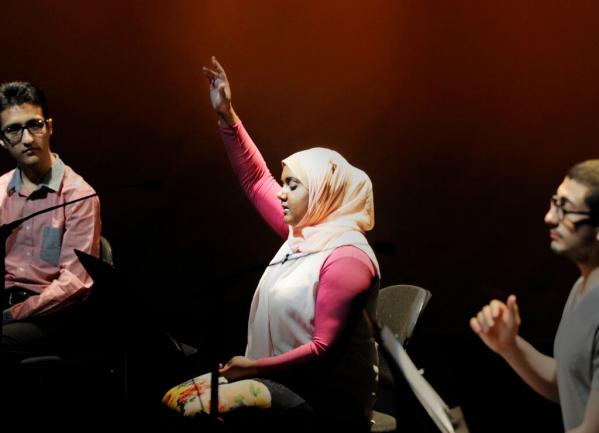 A “probing and persuasive new work…an exercise in empathy, not polemics: a lesson in human understanding, drawn from real lives.” - The New York Times

Beyond Sacred is an interview-based theatre production exploring the diverse experiences of Muslim communities within New York City. The five cast members vary in many ways, but share the common experience of coming of age in a post-9/11 NYC at a time of increasing Islamophobia. Participants come from a mix of of cultural and ethnic backgrounds and include young men and women that reflect a wide range of Muslim identities, including those who have converted to Islam, those who were raised Muslim, but have since left the faith, those who identify as “culturally” Muslim, and those who are observant on a daily basis. Beyond Sacred is part of Ping Chong + Company’s Undesirable Elements project, an oral history theater project exploring issues of culture, identity, and difference in the lives of individuals in specific communities. The goal of Beyond Sacred is to use theater and personal testimony to foster greater understanding among Muslim and non-Muslim communities in New York and beyond.

Beyond Sacred is part of the culmination of Myriad Voices: A Cross-Cultural Performance Festival. Myriad Voices is made possible in part by a grant from the Association of Performing Arts Presenters (APAP); Building Bridges: Campus Community Engagement Grants Program, a component of the Doris Duke Charitable Foundation and Doris Duke Foundation for Islamic Art.