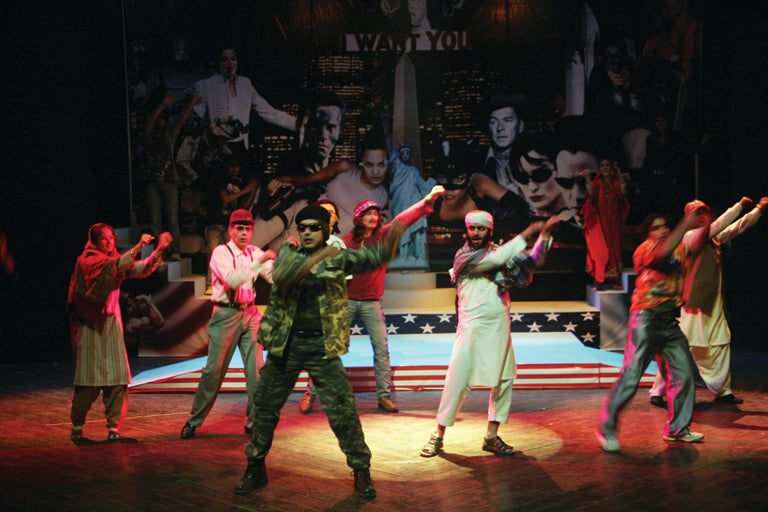 A past performance of Amrika Chalo can be viewed via HowlRound.

The following related panel discussion was free and unticketed:

Politics, Comedy, and the Dangers of Satire

A panel discussion moderated by Professor Derek Goldman, Co-Director of the Lab including

Zarqa Nawar
Author of the best selling comedic memoir Laughing All the Way to the Mosque and creator of the world’s first sitcom about a Muslim community living in the west, Little Mosque on the Prairie

The Laboratory for Global Performance and Politics will host this timely forum, presented in association with the U.S. premiere of Ajoka Theatre of Lahore’s Amrika Chalo (Destination USA). Ajoka Theatre has been the target of violent threats, and Pakistani authorities have banned Nadeem’s Burqavanza for the play’s criticism of a fundamentalist interpretation of Islam. Nadeem himself lived in exile until 1993 because of violent responses to his satirical plays. The tragic incidents in Paris provide a bracing reminder and a highly charged political and ideological context for the complex and essential role satire and freedom of expression play in our society. Presented in partnership with the Berkley Center for Religion, Peace, and World Affairs; Bridges of Understanding; and Georgetown University’s Office of the President.

Written and directed by Pakistan’s leading Theater artist Shahid Nadeem from Lahore’s Ajoka Theatre, this hilarious send-up of U.S.-Pakistani relations set in an American consulate in Pakistan explodes stereotypes through satire. This workshop production will feature Pakistani artists from Ajoka Theatre as well as guest US professionals and advanced students.

This event is the second of four anchoring events in The Lab’s Myriad Voices: A Cross Cultural Performance Festival. This two-year Festival is a series of performances from leading artists around the world that will be accompanied by convenings, public forums, interdisciplinary courses, and the creation of new work.