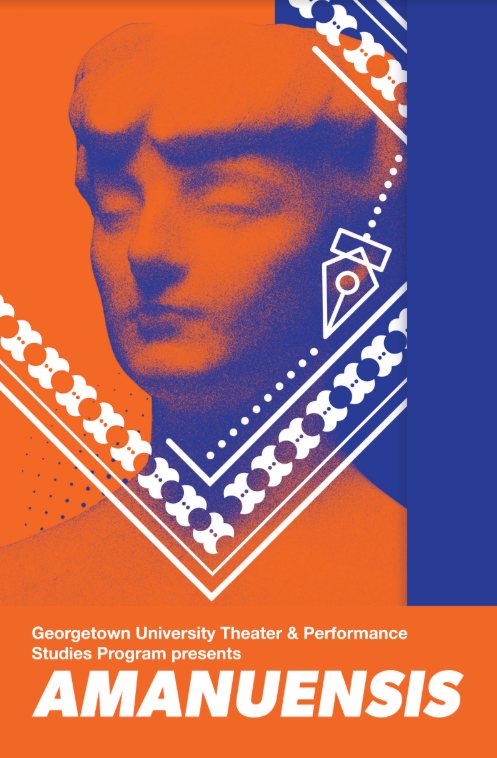 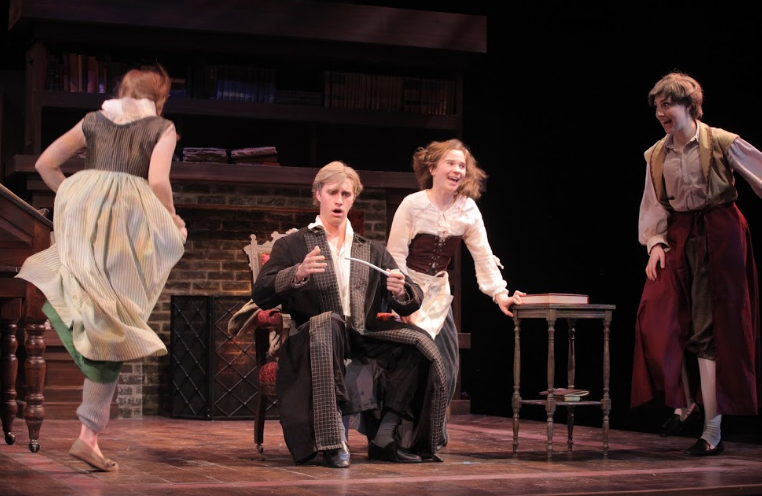 Artfully told through the eyes of three young sisters, Amanuensis imagines the life and relationships of Poet John Milton during the seven years he spent writing Paradise Lost, the epic poem famously transcribed by his daughters whom he kept barely literate when he was was blind and outcast. Written by an exciting feminist playwright with eloquence, high theatricality, and riotous comedy, this new play “set” during 17th-century England’s social volatility—and, too, now—Amanuensis interrogates the relationship between genius and privilege, authorship and history, gender and voice. Savvy allusions to Milton’s allegory about the Garden of Eden, as well as King Lear, with moving family drama and high fun for all!

Indeed the best parts of the play are the several scenes when the three daughters—Mary (Kate Ginna), Anne (Michaela Farrell), and Deborah (Healy Knight)—cut loose and play-act. There’s an episode in which, trying to explain how they were made, they pretend to be men and amusingly emulate wearing trousers by hiking up their long skirts between their legs. (Costume Designer Debra Kim Sivigny, a professor at Georgetown, has created a wonderful wardrobe that locates the period yet suggests levity.)

Read more about the review of Amanuensis

In the play’s world premiere at the Davis Performing Arts Center, the Gonda Theater’s production of L M Feldman’s “Amanuensis” invites its audience to tackle the complexities of the human experience by confronting the disparities between romanticized renderings and the truth.

Set in 17th-century England at the height of its social instability, “Amanuensis” spans the seven-year period when Milton, played by Alexander Prout (COL ’19), wrote the epic poem “Paradise Lost.”

Read more about the review of Amanuensis

As part of her research, director Roth hosted Feldman for a developmental reading with professional actors (including Rick Foucheux, Rocelyn Halili and Amanda Forstrom, among others) in November 2017, and then the Theater & Performance Studies Program hosted the Philadelphia-based playwright for a week’s residency from February 16-22, 2018, during the first week of rehearsals.

Read more about Amanuensis at Georgetown

Unjust Were the Ways of Milton

The poet John Milton — husband of three wives, father of three daughters and the offstage presence who looms over Eva Figes’s sixth novel, “The Tree of Knowledge” — had considerable difficulty with the women in his life. His first wife, the 17-year-old Mary Powell, fled home to her family immediately after the marriage and stayed away for several years. Eventually, Milton managed to effect some reconciliation and the two settled down, however warily, producing four children: his daughters, Anne, Mary and Deborah, as well as John, his only son, who died in infancy.