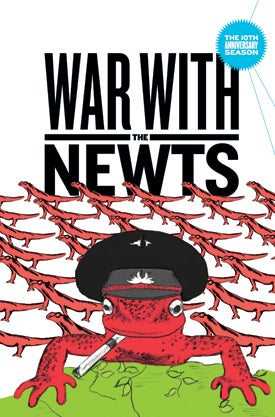 WORLD PREMIERE
War with the Newts

Adapted and directed by Prof. Natsu Onoda Power
From the novel by Karel Čapek

On a small island west of Sumatra, Captain Jan van Toch discovers an unusual species of intelligent newts, who multiply quickly and can be trained to use tools – a convenient new source of cheap labor for underwater engineering projects. But what happens when they learn to speak our languages, demand their rights, and build not only dams but also bombs? This world premiere adaptation of War with the Newts, Karel Čapek’s satirical 1939 science fiction classic, is a literary “mockumentary,” incorporating fictional newspaper articles and scientific reports.  The production promises to showcase Onoda Power’s “nifty visual tricks” and “delightfully unexpected” (Washington Post) solutions for the stage. This production is offered in conjunction with the Embassy of the Czech Republic’s Mutual Inspirations Festival and with the Davis Performing Arts Center’s 10th Anniversary Celebration. 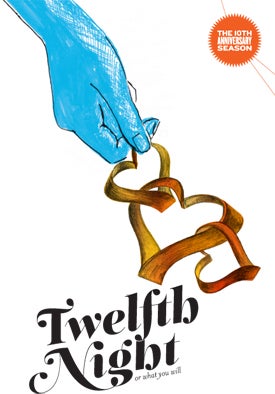 Twelfth Night, or What You Will

A new take on Shakespeare’s classic comedy Twelfth Night. Expect high theatricality and a hint of Carnivale in this tale of twins separated at sea, gender-bending love triangles, mistaken identity, midnight revelry, and loss that transforms like a dream. Fall into this play’s exquisite fantasia… Featuring close collaboration with faculty and students, including Artist-in-Residence Debra Kim Sivigny. This production serves as the finale for Making New Worlds: The 10th Anniversary Season at the Davis Performing Arts Center.
The April 21 performance will be sign-interpreted. 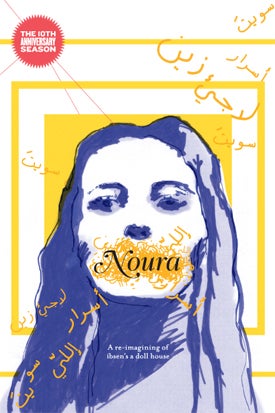 A workshop reading
Noura: A Re-Imagining of Ibsen’s A Doll’s House

Award-winning Iraqi-American playwright and performer Heather Raffo​ (9 Parts of Desire)​ reimagines and reframes Ibsen’s iconic play from a Middle Eastern perspective. Her contemporary characters, a family of Iraqi immigrants, grapple with past and present shames as they try to reconcile their relationship to their identity and to each other. This workshop reading will be developed in a residency by Raffo at Georgetown, where she will work with professional collaborators, scholars, faculty, and students.

This event is presented by Georgetown’s Theater & Performance Studies Program in conjunction with the Laboratory for Global Performance and Politics’ Myriad Voices: A Cross-Cultural Performance Festival, and as part of the Georgetown/Arena Stage/Ammerman Family Partnership. 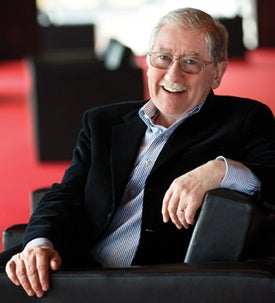 The Georgetown University Theater & Performance Studies Program is excited to welcome internationally renowned guest artist Joe Dowling back to campus for the third time, now for an intensive residency culminating in this public showing of scenes. Launching a two-year initiative, Dowling, recently retired artistic director of the Guthrie Theater in Minneapolis, MN (from 1995 to 2015), will serve as the Kenyon Family Distinguished Artist-in-Residence, working closely with Georgetown theater students in conjunction with the Georgetown University/Arena Stage/Ammerman Family Partnership.

As the Guthrie Theater’s Artistic Director, Joe Dowling directed 51 Guthrie productions and cultivated relationships with an extensive roster of esteemed artists including Angela Bassett, David Esbjornson, John Guare, T.R. Knight, Ethan McSweeny, Arthur Miller, Marsha Norman, Lisa Peterson, Mark Rylance and Courtney B. Vance, among others. His directorial credits include work on Broadway as well as many prominent theaters in the U.S., England, and Ireland. Prior to the Guthrie, Mr. Dowling served as artistic director for the Irish Theatre Company, the Abbey Theatre – where he founded the Young Abbey, Ireland’s first theater-in-education group – and The Gaiety Theatre where he founded the Gaiety School of Acting, Ireland’s premier drama school.

Under Dowling’s leadership, two actor training programs were created: the University of Minnesota/Guthrie Theater B.F.A. Actor Training Program and A Guthrie Experience for Actors in Training. The Guthrie’s partnership with The Acting Company of New York affords young actors an opportunity to perform classics on tour. Additionally, in 2001 Dowling developed the WorldStage Series, which has hosted more than a dozen companies including the Royal Shakespeare Company with Sir Ian McKellen in King Lear, Kneehigh Theatre with Brief Encounter and Tristan & Yseult under the direction of Emma Rice, and Druid Theatre Company with its production of DruidSynge directed by Garry Hynes.

Additional updates on this residency to be posted here. 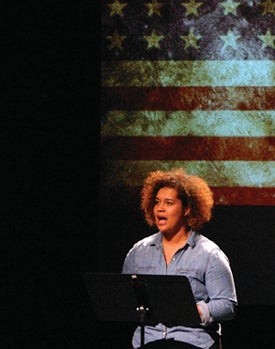 Grayspace (n.): Fractures in our social consciousness, areas of society left undefined or left forgotten,
the place where invisible life teems below the surface.

Written and performed by TPST Major Mar J. Cox (COL 16), this senior thesis project shines a light on the missing voices and narratives that take place in the frayed and cracked parts of our society. Whom do we not see? Why? A transwoman takes the D6 nearly every Sunday. A waiter smiles when a toddler compliments his skirt. A homeless artist accepts pepperoni pizza donations as payment for his company, but never for his cardboard artwork. This living project, inspired by interviews and leading to a multi-character performance work, suggests the only way we will know is if we listen to the Voices of the Invisible. A work-in-progress, Grayspace is based on yearlong ethnographic research in Washington, DC.